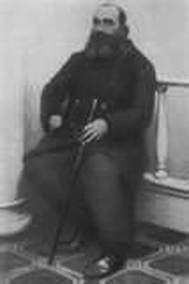 Jakob Lorber was born in 1800, he was a simple and humble man.  At 40 years of age he received a series of dictations as a voice in his heart.  Following this he went to on write a number of volumes of spiritual texts which serve to clarify the teachings of the Bible for the modern age.

In "A Guide for the Perplexed" the famous economist E.F Schumacher described these writings as:

"such a plethora of high wisdom and insight that it would difficult to find anything more impressive in the whole world of literature".

Did God create a Hell?

"Has there to be a hell? And do such spirits have to be capable of pain? Could all this not be arranged in a less cruel way?'

Say I: Hearken my dear friend, do you think that God set up hell that way? Oh, here you are much mistaken! Behold, this was done by the spirits themselves, from antiquity. God merely permitted it in order not to curtail their freedom in the least. But that He should have created a hell, that no being in heaven can remotely imagine. For if God could create a hell, then He would also have to be imbued with sin and evil, which would be an impossibility for God, for it is not possible for him to act against his own eternal order.  And so it is unthinkable that God, out of Himself, in the actual sense of the word, could create hell. But He can and must allow it to the freest spirits, if out of their completely perverted original order they prepare circumstances for themselves which indeed are most evil and wicked.

You shall not however, throughout all infinite anywhere find a place which had already been founded by God as hell. For nowhere is there a hell outside of man himself."

This is explained by analogy later on the same page:

"... If someone owns a vineyard into which only precious vines are planted, the owner eradicating all precious vines afterwards, setting thorns and thistles in their place, finding more pleasure in such wild growths rather than in simple vines, - say, is the Deity also to blame if this foolish owner takes in no wine harvest, becoming thereby a miserable person without means?"

The Meaning of Genesis - Creation of the Fourth Day.

Which way do you read Genesis? Is it not written thus:

If you illumine this matter a little with even your intellectual power then the crassest nonsense must strike your eyes at first glance, if you take the wording as its meaning!

According to Genesis, God created the light already on the first day, and out of the evening and morning became the first day. Tell Me, what kind of light was this that adequately effected day and night for three days? On the fourth day God again said 'Let there be lights in heaven'! Question: what kind of lights that should divide day and night? Did not the light created on the first day effect this for three days? Why on the fourth day more lights for the same effect? On top of that there is talk of only 'lights', but not the slightest mention of a moon and sun! These lights furthermore also effect signs - what signs? Finally seasons - which ones? - and days and years - what days and years? Is night nothing? Does not night count the same as day?

And on top of that the earth is spherical and always has day on one side and night on the other. According to the revolving of the earth from evening to morning (west to east) around its own axis, there will always be day where the lands find themselves in the sun, or more precisely, where the steady turning of the earth pushes the earth under the sun as it were.

If therefore indisputably the natural day of the earth is brought about by its peculiar movement, where the sun does nothing other than shine at one point, effecting day through its light wherever its light penetrates, and hence cannot and does not want to rule the day thereby, question: how should Moses have meant sun and moon by his lights? And had he meant the natural sun and the natural moon, then for greater clarification of his revelation to mankind he would have named these two lights, since all men in Moses' time already were able to name these two spheres!

Besides this, Moses speaks of a firmament in heaven which in the natural outer space exists nowhere in actuality, in that sun, moon and all stars as well as this earth float freely in the ether, restricted nowhere, maintained in their purposeful position through the law laid within them, having free movement without attachment to any heavenly firmament!

Because there is only one firmament in infinite and free space, and this is the will of God, through which the former is filled with an unchangeable law throughout.

If that which to your eyes appears as an immensely spread-out blue vault, with the sun, moon and stars somehow fastened to same, how could they move and in the case of the familiar planets, continually change their positions?

The other stars, which you call fixed, appear of course as if attached to some kind of firmament, but this is not so. They only are removed so far from the earth and their tracks so extended that often they hardly cover these in several hundreds of thousand years, and for this reason their movements are not perceived throughout even a hundred human life-times. And that is the reason they appear to you as all but fixed. But in reality it is otherwise and there is to be found no so-called firmament throughout infinite space.

The firmament which Moses means is the firm will within the divine order, gone forth from the right understanding and love, which is the blessed soil of life. Since such will can however only go forth from the fertile fullness of the true divine love in man's heart, just as this goes forth from the heavenly light which God had poured out in man when dividing the latter's inner darkness into evening and morning, just so the heaven within man is this right love and the right insight and the right intellect, which manifest as a living faith. And the firm will within the divine order is the firmament of heaven in man, and into such firmament, if same is in accordance with the love-will of God and the right order, God puts now lights out of the Heaven of heavens, which is the right Father love in God's heart. And the lights then light up the will, raising it to the insight of the angels of the Heaven of heavens, and therewith raise the created man to the uncreated one, who had transformed himself, as a child of God, through his own free will within the divine order.

For as long as man is a creature he is temporal, transitory and cannot endure; because every man in his natural state is merely a suitable vessel within which a man proper can develop through God's constant participation.

Once the outer vessel has reached the right degree of development, to which end God has provided same with all essential parts and properties over abundantly, He then awakens or rather develops His uncreated eternal Spirit within man's heart, and this Spirit in its effect is what Moses understands and wishes to be understood by the two great lights which God put in the firmament, the way it also was understood, and never otherwise, by all patriarchs and prophets.

This eternal, uncreated, eternally live light in the heavenly firmament of man only then is the really true ruler of the actual day within man, teaching the former vessel to fully transform itself into its uncreated divine being and to therewith make the entire man into a true child of God.

Every created man however has a living soul, which indeed also is a spirit, with the necessary capacity to know the good and the true, and the evil and the false, acquiring the good and true and banishing the evil and false from itself; nevertheless it is not an uncreated but created spirit, and as such can never by itself gain the childhood of God.

If however it has in all humility and modesty of heart and from the free will implanted by God, accepted the good and true in accordance with the law given it, then such humble, modest and obedient will has, to put it bluntly, become a heavenly firmament, because it has developed itself in accordance with the celestial placed within it, becoming then fully capable of assuming the uncreated divine nature.

The purely divine or uncreated Spirit of God now placed permanently into such celestial firmament is the great light; man's soul however which is transformed to an almost equally great light through the great light is the smaller and lesser light, which however like the uncreated great light is placed in the same celestial firmament and transformed to a co-uncreated light, without losing any of its natural nature but instead gaining endlessly in a fully purified spiritual sense. Because by itself man's soul could never behold God in His purest divine nature, and the purest uncreated Spirit conversely, could not behold the natural, since there exists for Him nothing materio-natural. But through the above mentioned complete conjunction of the purest Spirit with the soul the latter can now behold God in His arch-spiritual purest Being through the new spirit provided it, and conversely the natural - by the Spirit through the soul.

This Moses is saying, that a great light is to rule the day and the lesser light the night, to determine the signs, i.e. to determine out of all wisdom the basis for every appearance and all created things, hence also determine the times, days and years, which is to say: to recognise God's wisdom, love and grace in all phenomena.

The stars which Moses also mentions are the countless useful cognitions - every individual thing, which latter of course all flow from the main cognition, and are therefore placed in the same heavenly firmament as the two main lights.

And behold, this at last is the fourth day of creation of which Moses speaks in Genesis, which nevertheless, as with the former three, has gone forth from the same evening and morning in man.